In Indonesia, the vaccine for SARS-CoV-2 is still being developed. ORF3a protein of SARS-CoV-2 could be a potential peptide to be used in the vaccine, therapeutic antibodies, and diagnostic kit development. We used the computational approach in designing some potential epitopes against the ORF3a protein of the virus. The reference sequences of ORF3a SARS-CoV-2 were retrieved from GISAID. In our previous study, we found 203 non-synonymous mutations from 3,751 samples in Indonesia. We categorized and compared the variation in this protein with reference sequences. To predict B cell epitopes, we used Immune Epitope Database (IEDB) and VaxiJen v.2.0 as analysis resources. We found two epitopes 177SPISEHDY184 and 74SKGVHFVCNLLLLFVTVYSHLLLVAAG100 that indicate antigen. Our study showed these predicted peptides could be used as a reference for the SARS-CoV-2 vaccine, therapeutic antibodies, and diagnostic development. This approach needs further studies to understand the functionality of the predicted proteins against SARS-CoV-2 that circulated especially in Indonesia.

This work is licensed under a Creative Commons Attribution-NonCommercial 4.0 International License.

The work has not been published before (except in the form of an abstract or part of a published lecture or thesis) and it is not under consideration for publication elsewhere. When the manuscript is accepted for publication in this journal, the authors agree to automatic transfer of the copyright to the publisher. 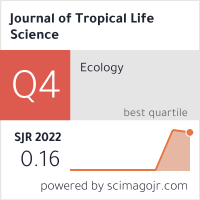